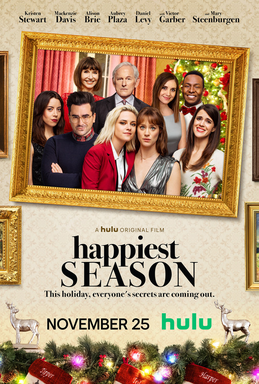 Happiest Season is a 2020 American romantic comedy film directed by Clea DuVall, from a screenplay written by DuVall and Mary Holland. The film’s ensemble cast consists of Kristen Stewart, Mackenzie Davis, Alison Brie, Aubrey Plaza, Dan Levy, Mary Holland, Victor Garber and Mary Steenburgen, and follows a woman who struggles to come out to her conservative parents during Christmas. DuVall has said the film is a semi-autobiographical take on her own experiences with her family.